DHR No. 19B
One of the original  "B Class" Sharp Stewart Steam Locomotive Comes Home.

It was withdrawn  from DHR service in 1960 and after overhaul at Tindharia Works, was purchased  by Elliott Donelley to run on his private railway in Illinois, USA. Upon  Mr Donelley's death in 1975 the locomotive was acquired by the Hesston  Museum in Northern Indiana.

After damage in  a major fire at the museum the locomotive was rebuilt in 1985 and continued  in service for a further three years before being displayed as a static exhibit.

In 2002 No 19 was purchased by Adrian Shooter, a DHRS member and Managing Director of Chiltern Railways.

It returned to the UK across the Atlantic in a shipping container in early 2003 and was fully restored  at Tyseley Locomotive Works, Birmingham, by a team led by the experienced  locomotive engineer, Bob Meanley.

At the same time, two replica DHR carriages  were constructed at the Boston Lodge Works of the Ffestiniog Railway

No 19 and its carriages are normally based at Adrian Shooter's private garden railway but the train makes occasional visits to other UK narrow gauge railways.

The DHRS has now produced a book about the history of 19B
See our sales page - www.dhrs.org/sales2/contents/en-uk/p194_The-Story-of-19B.html

Adrian Shooter supervises the  unloading of No.19 from its shipping container on arrival at Tyseley Locomotive Works 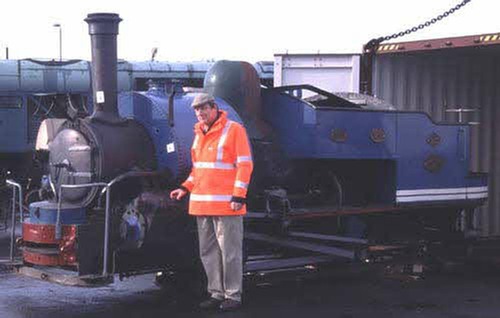 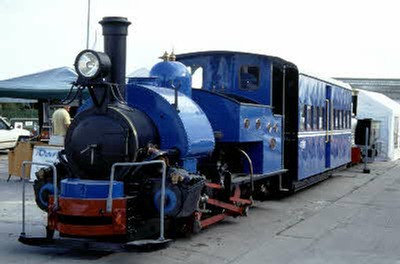 No. 19 and its train at 'Sukna' -alias Minffordd Station on the Ffestiniog Railway, May 2005 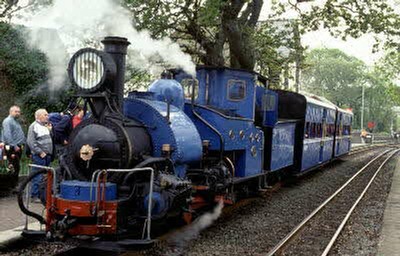